Adidas has officially announced they are deep down the rabbit hole of the Metaverse, partnering up with considered blue chip NFT projects Bored Ape Yacht Club, and Punks Comic in what they consider to be “one of the most exciting developments in digital”.

On the back of their tweet, a link will take you directly to a page which states: 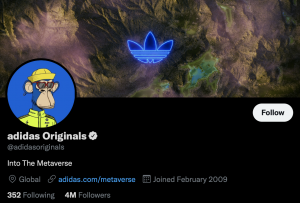 If this is all new to you, think of an NFT and changing your pfp to one, as being much like a ‘digital flex’; similar to how some may wear a Rolex or wear designer.

In addition, NFT’s allow the holder extensive utility and perks; which vary from project to project.

This comes as many Celebrities have joined the Bored Ape Yacht Club over the past month, changing their profile pictures as they do so, displaying how they are a part of one of the most elite NFT circles out there.

Some celebs in the BAYC include: Post Malone, The Chainsmokers, Jimmy Fallon, Logan Paul, Mark Cuban.

The list at this point is only growing and those A listers are just the tip of a very big iceberg not only for the BAYC, but for the NFT space alike.

It was also reported that Kylie Jenner DM’d a member of the BAYC asking what their price was to sell their pink Bored Ape, to no avail.

Adidas purchased Bored Ape Yacht Club #8,774 which was last sold for 46ETH ($156K at the time of settlement). The BAYC has heart-shaped sunglasses, a gold hoop for earrings, a “bored” look, a fisherman’s hat, and blue fur. In the recent Adidas tweet, the company has the BAYC sporting a yellow Adidas jacket with the classic three-stripe design.

The Bored Ape Yacht Club currently, at the time of writing boasts a ‘floor price’ (cheapest you can obtain a Bored Ape on the secondary market for) of 50.6ETH, or $231,000.

So, what can your brand do?

If your brand can begin to understand this new emerging world of digital flex, private circles, and how NFT’s provide their owners with exclusive utility, it could be a whole new way of bringing your fans into your world, and making them feel a part of something entirely exclusive.

Just this week, Budweiser released their NFT collection and also now own the domain ‘beer.eth’. Simultaneously changing their Twitter name to this URL in tandem.

There’s no doubt that the Metaverse is coming, and will be a fundamental keystone of our lives in years to come and as web3.0 begins to take full flight.

If you as a brand are advertising on Facebook right now, you’ll be a part of this shift inevitably, as Facebook announced their name change to ‘Meta’ whilst also demonstrating their vision for how their platform will evolve into a full Metaverse in the future.

The world is changing, and this presents an opportune moment for brands and those who can follow the breadcrumbs to where this is all leading.

We at The Normal Company are working hard on the tech side of our business to keep our brands at the very forefront of how this is all unfolding, and have already made steps with a small handful of our clients to guide them on their Metaverse & NFT brand proposition, with some in early stage development as we speak.

We now look to potentially build out a fully done for you service ‘DFY’ when it comes to creating smart contracts, and building out NFT collections on the blockchain for brands that want to be a part of this web3.0 shift. 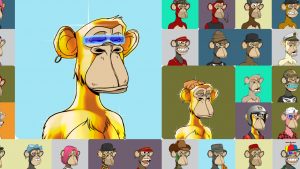