Puma. A brand we are all familiar with. Founded in 1948, they have been an ever-present in the sports scene, adorning sports shops worldwide and boasting heavy endorsement deals over the past 3 decades in multiple industries.

For Puma, basketball was and still is, a key facet of their brand.

However, their first attempt at the lucrative scene of NBA fell way short of competitors, and sent Puma down the pecking order of consumers minds, against the likes of Nike and Adidas, who conquered for years.

Before Nike popped up onto the scene, Puma was the power player, almost untouchable as they represented some of the NBA’s top players at the time.

They had one small issue with this however, much like a lot of current brands in today’s market with keystone influencers and the marketing budget allocated to human endorsement; They couldn’t turn a profit on this area.

And so they shut down the division, enabling Nike & Adidas to take over and storm the market, whereby you’ll still find around 75% of NBA players wearing Nike shoes when they enter court.

More importantly, as NBA increased in popularity, Nike’s brand thrived financially as they ride the wave of basketball popularity and fan-demonium.

Here’s a key take away from this that you may not have known: The basketball shoe business isn’t a lucrative one when it comes to profits. The typical profit margin within this sector all things accounted for is just a 5% profit margin. This proves that for the power players who have been around for generations, it’s all about the cultural influence (which is leverage and huge brand equity in consumers minds), rather than making quick returns on the short term.

With revenue dropping sharply by 10% from 2012-2014, Puma knew changes were needed, and fast to remain competitive.

Who did Puma seek out first to join them on this climb?

None other than Rihanna herself.

Rihanna was named creative director of Puma Women. With women’s sales ramping up a heavy 92%, Puma saw immediate results from the introduction of RiRi, to no surprise. Of course, the brand leverage from this was also something to be accounted for.

Did they stop there?

No, Puma had their sights on taking things back to where they wanted to be within the basketball arena. To do this, they looked to someone of equal measure when it comes to influence, a true G.O.A.T by the name of Jay Z.

Given his cultural appeal and connection to sports biggest stars through Roc Nation, it was a no-brainer for the brand to bring in such a mogul.

Thereafter, Jay Z became the new Creative Director of Puma Basketball. Upon this announcement, one of his conditions was that he wanted a Puma Jet. 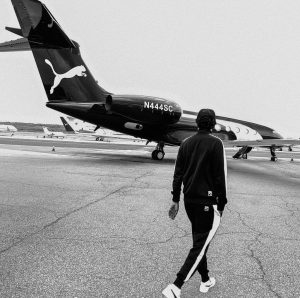 Jay felt that creating a fully Puma branded private jet would set the brand apart, and of course it did just that.

The brand wasn’t playing around, fully investing into every facet possible to ramp up brand image, set itself apart from the competition, and launch an attack on the markets it wanted to be a big player within.

They even personalized the tail number for Jay Z:

It’s not just a gimmick either, players routinely mentioned their ability to use the “Puma Jet” as an advantage.

Word was getting around, and Puma were becoming a heavy hitter once again, and no longer in the shadows of Nike and Adidas.

Where they could have easily backed down or tried to get on a level with competition, Puma always went one step further, attempting to break the market and leapfrog competition to be the best they possibly can be, crafting their own image, on their own terms for domination of their sector.

Outside of basketball, Puma has routinely continued to delve into celebrity image. Recent brand partnerships from celebs range from The Weeknd, right through to Victorias Secret model Adriana Lima. 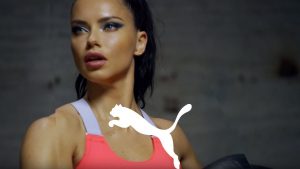 From Victorias Secret they then go to other sports, notably F1 and Football with Lewis Hamilton and Neymar Jr.

This for us, proves the point that standing alone, doing different and thinking different, leads to different results. Brands can learn a whole lot from Puma’s approach when it comes to endorsement and driving up company profits and value. The message is clear; think outside of your current thought sphere, and delve into new spaces.

After seeing their annual revenue decline for two consecutive years, Puma’s all out celebrity strategy has skyrocketed their growth to phenomenal levels.

Today, with the focus on cultural influence embodying the brand, Puma is now more relevant than ever before, proving that when a brand can pivot and reach out to new areas, it can often pay off if the execution is strong.

This shift for Puma changed the direction for their entire brand, and for the better as they are poised to remain a heavy hitter in multiple industries for many more decades.