Whatever he puts on, you KNOW it will kick off on social media with people asking questions, asking when it may be released, and asking when and where they can grab the same pieces.

Kanye donned some new Yeezy’s in California, and @yeezymafia were (excuse the pun) hot on the heels of the new step out earlier this week. 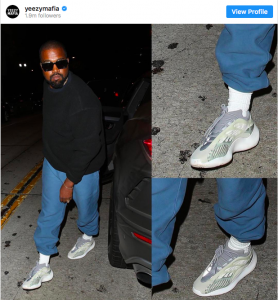 Their page has gone OFF since the post, and this has inevitably lead to increasing speculation not only of new limited edition Yeezy’s hitting the market, but potentially a new line.

Could this be an upcoming release?

Could it be a stunt?

Could this be a new summer line? A lighter, more stripped back and neutral release?

Either way, we’re in.